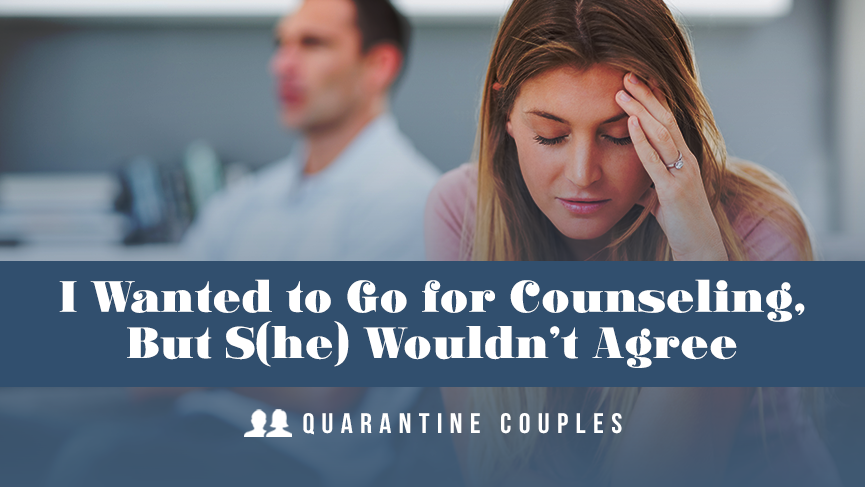 I WANTED TO GO FOR COUNSELING, BUT S(HE) WOULDN’T AGREE.

​“My wife suggested we go for counseling a couple of years ago, but I didn’t think it was necessary. I mean, I figured we could solve our problems ourselves. I didn’t see the point of getting someone else involved in our business.”

“I asked him to come with me for marriage therapy six months ago, but he refused. Now that I told him it’s over and I want a divorce, he’s suddenly interested. It’s a little too late for me.”

Any therapist working with couples will tell you they’ve heard statements like these multiple times. One person wants to go and the other refuses, so no one goes. One day, when the foot dragging partner figures out his partner was serious, and he envisions almost everything he values in life crumbling away, counseling seems like the best idea ever. Only trouble is, it very well may be too late.

Why does this happen? Two main reasons really.

Men tend to be more content in marriage than women.
Men typically tend to have fewer demands and lower expectations than their partner. As long as life rolls along in a reasonably smooth manner—food on the table, clean clothing in the closet, kids taken care of—life is acceptable.

Women often have a different standard. In fact, some have labeled them as the “emotional barometer” of the relationship. They tend to value emotional connection and healthy sacrifice on the part of their partner. They share their needs and perceptions with their mate with the hope he will listen and alter his behavior. When this doesn’t happen, when he avoids addressing problem behavior, then at some point, she may give up asking him to change. He thinks, “Good, she’s finally stopped nagging me,” but this is not a good sign. She isn’t happily accepting the reality of his stubbornness. She is using her energy to make plans for the future that do not include him. It may take time to save money, to finish a degree, to get a better paying job, but she has set her face on getting out the door.

When the wife makes the call for marital therapy . . .
​A number of therapists, including myself, agree – when a woman calls asking for therapy there’s often a better chance of saving the relationship than when a man calls. When the wife calls, she’s still trying to save the marriage and there are things she can do by herself that increase the odds of her partner changing. When a man calls, it is typically because his wife, who has been making plans for months or years, has made it clear the marriage is over and she is all but gone. Although there are things he can do on his own accord at this point, it’s much more difficult to draw her back into the relationship.

Mistaken Beliefs
A second, very important reason I hear statements like those above is the belief that both partners must participate in therapy for real change to occur. While it may be helpful for two people to come to therapy together, it doesn’t always happen—at least initially. A funny thing happens, though, when one person comes in. When they get home, the non-attending partner usually asks, “So what did you talk about? What did she say?” In other words, curiosity about what is being discussed is a powerful motivating factor.

Plus, a marriage-friendly therapist may make a personal invitation to the reluctant partner if the partner in attendance agrees. After all, only one’s partner knows what it’s really like to live with you. My point is simply that the very act of coming in, even without your partner, can be the sign that you are dead serious about addressing the problems in your marriage—a sign your spouse might want to pay attention to.

Even when one-half of the couple never attends a couple session, a marriage-friendly therapist can often help one partner to produce change in the other, without them in the room. In fact, many times I’ve had success in working with only one person. (More about that next week.)

The main point here is that if your marriage is having problems, don’t wait for your partner to say “yes” to therapy. Make the appointment yourself. Come on your own. Take the initiative to stand up for what you think is important with or without your partner’s participation.

Congratulations are in order.
​I’ve been known to congratulate husbands when they come to therapy with their wives.

“Congratulations,” I say. “You cared enough to listen to your wife while she’s still talking to you. She still wants to be married to you. She hasn’t thrown in the towel. You’re a smart guy—much smarter than those guys who wait to call me until she’s ready to file for divorce.”

Have you hit a rough patch in your relationship? Want to be one of those smart guys who is not trying to figure out how to get along with half his stuff and only 50% of the time with his kids?  Take the initiative to make an appointment for counseling sooner rather than later. Be the leader in your relationship and family for addressing problems. Your wife and kids will thank you.

Dr. Jennifer Baker is a clinical psychologist and a marriage and family therapist with more than 30 years experience helping individuals, couples and families. She is also the Founder & Executive Director of Good Dads.