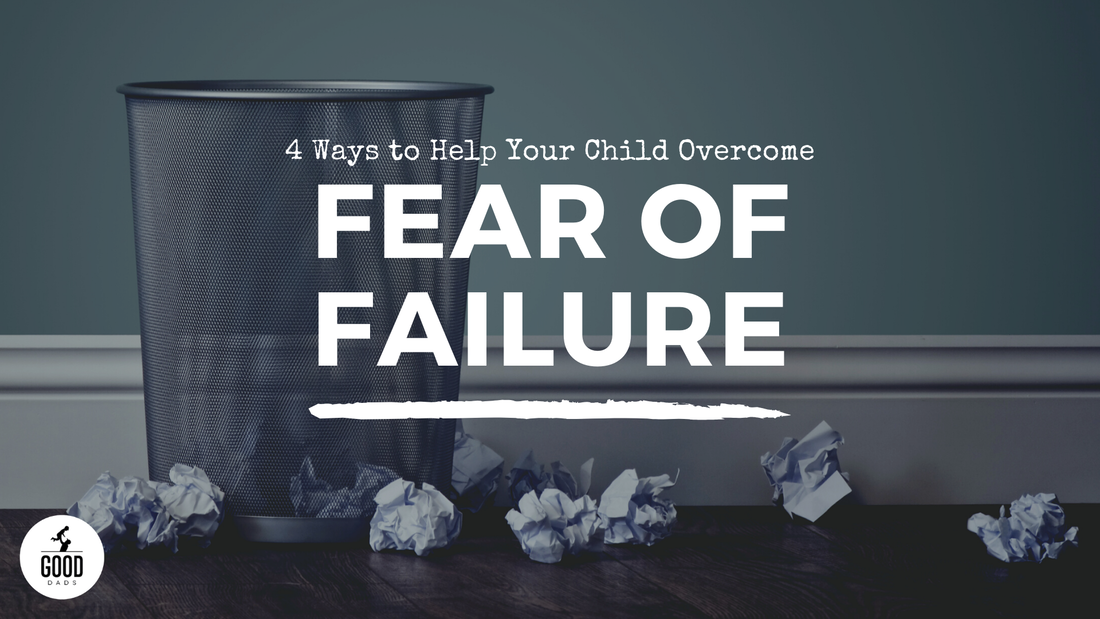 4 WAYS TO HELP YOUR CHILD OVERCOME FEAR OF FAILURE

And so the lines are drawn, and the battle begins . . .

Sound familiar?  I don’t know any father who hasn’t played out the above scenario in some form or another with his kids, and it can be a very frustrating experience on both sides.

Granted, if our children’s biggest struggle is with trying new food at dinner, they’re probably not going to be emotionally crippled for life.  On the other hand, if they are paralyzed with fear about trying anything new, they could miss out on a great deal of the joy and adventure of living.

So what can we do as fathers to help our children overcome their fears and welcome new experiences in life?

We can proactively address four underlying beliefs that hold our kids back, and we can build a set of beliefs into the foundation of their character that will help them embrace the new rather than fear it.

4 Limiting Beliefs That Hold Kids Back

Belief #1: Inability (“I can’t do it”)
Kids sometimes think that because they haven’t done something before, that means they can’t do it.  As fathers, we can help foster a sense of independence in our children by giving them small things to do from a very young age.   We can encourage their natural inclination to want to “do it myself”, then congratulate them on their successes, and not criticize when the finished product is less than perfect.

My 8-year-old daughter Charissa and I were building Lego houses together a few months ago.  After a while, I saw how I could “improve” part of her design.  I started rebuilding a stairway so it would be more sturdy and, in my opinion, more aesthetically pleasing.  My daughter saw what I was doing and said seven words that had me scrambling to put things back the way I found them.  She looked at me with her big eyes and just said, “I worked really hard on that, Daddy.”  I’m grateful she spoke up and helped me realize that despite my good intentions, I was sending her a message that she wasn’t good enough.  I pray I never make that mistake again.

Belief #2: Incompetence (“I won’t be good at it”)
Even when a child realizes they have the ability to do something new, they may not have the assurance they can do it well.  For some kids, that’s a show-stopper.  As fathers, we can help foster a sense of confidence in our children by giving sincere praise for their accomplishments.  By celebrating their achievements with them, our children grow more self-assured and more eager to try something new.

Charissa is learning how to play basketball, and before her first game, she was terrified she would make a mistake and be embarrassed in front of everyone.  Fortunately, she has a great coach.  He made a concerted effort to give positive feedback for every good move on the court, and by the time the game was over, Charissa’s main comment was, “That was fun!”  I want to be an encouraging coach for her as well, so every new experience she has will end with the same feeling.

Belief #3: Insecurity (“I’m not safe”)
If children don’t feel safe, they have a difficult time taking risks with new situations.  Kids need to know they are loved and protected unconditionally.  As fathers, we can help foster a sense of security in our children by showing them how important they are to us and by providing them with a stable environment.  We do this by spending time with them, enjoying them, and listening carefully to how they feel.

When Charissa was six years old, I took her to a local Daddy-Daughter Dance.  I left the house early and purchased a white rose, then drove back home and rang the front doorbell.  When my wife opened the door, I saw Charissa all dressed up with her face just beaming at me, and it brought tears to my eyes.  I knew I’d done something right.  I’d added to Charissa’s foundational beliefs about her value, her security and her confidence.  I’d let her know she was loved.

Belief #4: Inadequacy (“If I fail, I’m a failure”)
If children get their sense of worth out of succeeding in what they do, then when they don’t succeed, their sense of worth plummets.  Rather than take that risk, some kids just avoid trying anything new.  As fathers, we can help foster a sense of strength in our children that helps them cope with the inevitable mistakes and missteps of life.  We do this verbally by letting them know it’s okay to make mistakes, and by not criticizing, teasing, or disapproving when they mess up.  We also strengthen our kids by modeling the process for them.  We can do new things together with them, and when it doesn’t go as planned, let them know it’s ok, help them think through a solution, and show them we’re still having fun.

I decided that for my daughter’s birthday this year, I was going to build a cake for her in the shape of a castle.  I’d never done anything like this before, but how hard could it be?  At one point in the process, Charissa saw the cake, and although she was polite, I could tell she had some doubts about how it was going to turn out.  So did I.  When her mother called to reassure Charissa that it couldn’t be that bad, her response was, “Oh but Mom, you can’t see it.”  Well, I modeled some perseverance and determination that day.  After adding about 30 reinforcing skewers, a Rice Krispy retaining wall around the whole cake, and even a few nails pounded into the foundation, it turned out all right.  Charissa loved it, and I think she learned a valuable lesson about how to accept mistakes and push on through.

Every child is different, and some will be more intimidated by new things than others, and that’s okay.  But all will benefit from having a solid foundation based on these four core beliefs replacing the limiting beliefs outlined above:

As good dads, our influence over our children in these four areas is greater than that of anyone else.  As we teach, encourage, support, and model these foundational beliefs for our kids, we will reap the reward of watching them grow and enjoy all the new experiences life has to offer.

---
For more great insights and tips be sure to subscribe to our Good Dads Podcast, and check out this Building Leadership Traits podcast where we discover ways we as dads can help prepare our Generation Z kids to be future leaders -- including the importance of letting your kids fail.

Steve Moser is the father of four and the husband of Mindy. He lives with his wife and his youngest child, Charissa, in Springfield, MO where he serves as the Parish Life Pastor at Redeemer Lutheran Church. He can be reached for question or comment at smoser@rlcmail.org