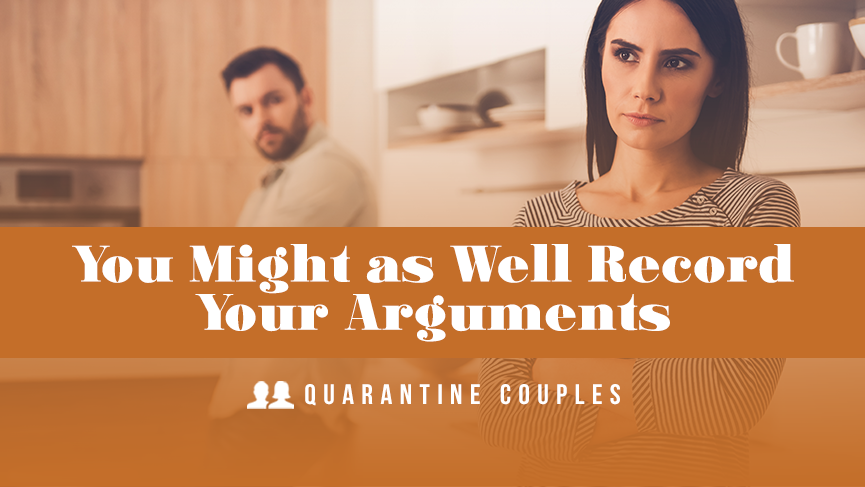 “You might as well record your arguments, leave them playing in the living room and go off and have fun together,” I said to the couple sitting in my office."

“I bet you already know what you can say to start a fight with your partner. You know what the reaction will be. You know who will say what and how the argument will end. You know who is the most likely to apologize and who will pout or hold a grudge.”

“That’s the way we are,” I concluded. “We are creatures of habit and the patterns we establish when we have a conflict or disagreement are very predictable.”

Here’s how it was for us. A number of years ago when we had two elementary-school age children, were both working, and I also was going to school, I noticed a distinct pattern in our relationship. Typically on Wednesday or Thursday night (more than any other night of the week) after 10:30 p.m., in the bedroom of our house, we had a much higher probability of finding ourselves in the midst of an argument that never ended well . . . at least not that evening. Here’s how it got going:
I rolled into the garage around 10:00--10:30 p.m. those nights dead tired and pretty much drained after a long day combining work and school. Depending on how the house looked as I made my way from the garage at one end of our ranch-style home to the bedroom at the other end of our home, the mood was set for how I greeted my husband.

If the house was neat and tidy—not a likely occurrence for a man who has worked all day, come home to fix supper for two kids, helped with homework and perhaps tied up a few loose ends of his own—then my mood was brighter and my greeting more cheery. If things were not as they should be (and I do confess to my own “recovering perfectionist” standards here), then all bets were off. It was almost a certainty we would have “words.” It usually went something like this:

Me: How come you’re in bed? Why is the kitchen such a mess? What did you do all evening?

Him: (Half-asleep) What are you talking about? I didn’t think the kitchen was that bad. I helped the kids with their homework. I thought that’s what you wanted. What am I supposed to do, “Strike up the band when you get home?”

Me: Why can’t you just wait up for me? You stay up if you’re watching something on TV. Why not for me?
​
Him: You’re making me crazy. I can never do enough. You’re never satisfied...

Though rarely, if ever, productive, the conversation typically continued like this until both of us, already exhausted from a long day of work, had a horrible night of “rest.” In the morning, we both suffered from what I called “fight hangover” as we dragged ourselves off to another day of work and parenting. It typically took at least another 24 hours until both of us were well-rested enough to move on from the unpleasantness. I don’t recall one time it ever ended in a positive or hopeful manner, but we kept this pattern going until I gave some thought to interrupting our “dance of discord.”

Changing the Dance
Here’s the thing, our patterns of handling conflict and disagreement are so scripted they’re like a choreographed dance (think square dance or folk dance) in which everyone has a set configuration. Change one person’s pattern and no one can dance in the same way without tripping on another.
In the same way, it only takes one person to change a dysfunctional relationship pattern. You can remain frustrated with your partner or you can do something yourself that’s likely to have a more productive outcome.  Consider the following possibilities:
​

We’re wired to do things in a predictable way, to repeat the same patterns of behavior. If we are unhappy with the result, however, then it might be a good idea to consider changing it up in some way to achieve a happier outcome. I believe they say insanity is doing the same thing over and over expecting different results. Think about what you can do to do something different.

​Dr. Jennifer Baker is the Founder and Executive Director of Good Dads. She is also a clinical psychologist with an emphasis in marriage and family therapy. As the wife of one, mother of two and grandmother of eight, she is absolutely committed to helping dads be more engaged with their children.