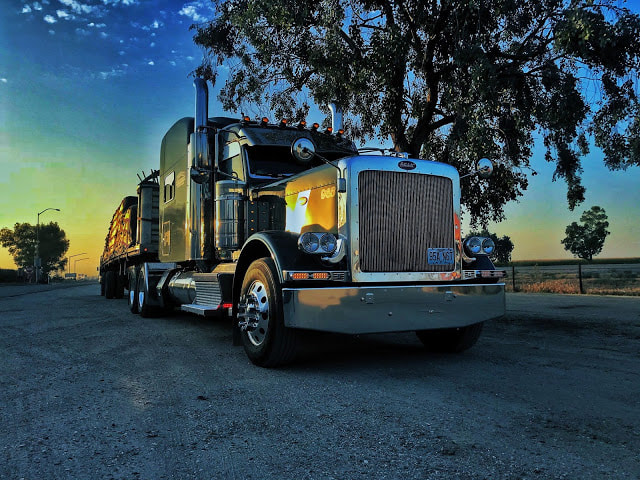 WOMEN OF STEEL(MAN): THE WOMEN BEHIND THE MEN OF STEELMAN TRANSPORTATION

Women of Steel. That’s what you might call the seven women gathered for lunch on a chilly November afternoon to talk about what it’s like to be married to a long-haul driver. Debra, Alika, Brandy, Terry, Melissa and Melanie—that’s who sat at the table. Donna joined us by phone. Their stories and histories vary, but the one thing they all have in common is their love and commitment to a man who drives an 18-wheeler. In this instance, all the men drive a flatbed trucks for Steelman Transportation, a trucking company located in Springfield, Missouri.

Terry Hayden: Terry’s husband has driven a truck for more than 40 years. She lived on the truck with him until family issues took her off the road. In fact, Terry worked as a certified driver herself for eight years. These days she says, “We talk all the time and use video chat.” She feels better knowing that her husband has his dog “right there in the truck with him.”

Theresa Greenland, aka Alika: Alika’s husband, Alan, has been driving on and off for 15 years, the past three for Steelman. She, too, uses video chat to stay in touch with her husband. She also has lived on the truck, but had to come off the road due to health issues. She describes life on the truck, “as a great adventure.” “Where else,” she asks, “could you get to see as much of the country as you can from the cab of a truck?”

Debra Hill:  Debra’s husband, Michael, has been driving for more than 20 years—the last three months with Steelman. Debra says she and Michael “talk on the phone a lot. Between the two of us, we have seven kids—all boys.” They are also grandparents to six grandchildren.

Brandy Howe: Brandy’s husband, Paul has been driving for 10 years – the first two with the military and the last eight with Steelman. The couple has two older children, 21 and 16. They expect the arrival of a new baby girl in the spring to change some things about the way they communicate, especially since they prefer talking on the phone to video chatting. When the baby arrives, Brandy predicts they will be using video chatting a lot more often.  ​

Donna Harper: Donna’s husband, Johnny, has been driving for 20 years. She believes it’s critical that to be “100% supportive of what he’s doing. If he is to be successful in his work, he must have support at home.”

Melissa Vaughn: As the newest member of the Women of Steel, Melissa has been with her boyfriend on the truck for two months. She sees her life at this point as an exciting journey and looks forward to what each new day will bring.

Melanie Borden: Melanie has been married to her husband, Paul, for 40 years. He’s been driving over the road since 2004, and she’s worked for Steelman Transportation since 2005. The couple has adult children and four grandchildren. “The honeymoon happens,” she says, “when he comes home. In between times, I can get my house clean and my life in order. Then he comes home and we have wonderful chaos.”

What It Takes to be a Woman of Steel
None of the Women of Steel I met would say that being the woman behind the man on the road is easy, but all can tell you how important their role is to their partner’s success.“I love YouTube,” claims Brandy. “I’ve learned a lot of ways to fix things at home on my own so that when he comes off the road he can enjoy himself and relax.”The other women agreed with Brandy listing the wide variety of things they handle so “he doesn’t have to worry about them.” These include handling all the financials (bills, child care, child support) and house and home repairs. They reason their driver does better when he knows, “she’s got it under control.”

“Sometimes,” they say, “we just do it (fix something) and then tell him. This way he doesn’t have to worry.”

“It’s important to keep the home stress at a minimum, so they can focus on driving.”Alika says, “I even buy his groceries for the truck so that when he’s home, he doesn’t have to think about doing that.”


Perhaps because of the shared experience the typical non-driving family might not understand, the women all expressed a close connection to Steelman and described their relationship “like family.” They said they have experienced a very welcoming environment, emotional support in hard times, and sensitivity to their partner’s desire to be home for special family events.

They’ve also reached out to other women with OTR (over-the-road) partners. Donna started a group on Facebook for Trucker Wives who want to support their driver and each other, “Trucker Wives Who Support Their Truckers and Each Other”. She believes the shared “adventure of the road” brings us all together. “Some women,” she says, “have messaged me and asked for input.” She believes it is critical for the women at home to have relationships with people who can relate positively.

Challenges for Women of Steel
Not surprisingly, extended time a part from each other is one of the biggest challenges these women face. They caution against being resentful about being alone and note that their partner is alone, too, on the truck. “He spends long hours by himself,” they explain. “That’s why communication is a big thing.”

Women of Steel also worry about their men. “Is he safe?” they wonder, as one of them describes how hard the job is. She has read that driving a truck over the road is more dangerous than being a fire fighter. “People don’t respect that,” she says. “They don’t know what a hard job it is.”

Becoming a Woman of Steel
It takes time to adjust to life on and off the road. According to the Women of Steel, “Flexibility is key.” They also emphasize how important it is to have “trust in and believe in each other.” When it comes to their partner’s job, they stress, “It’s important to remember they drive because they want to take care of their family.”

Donna offers, “Even when he can’t be home, try and include him as much as possible. Talk with him about what’s going on. And do fun things!” Donna and her husband have even done something she refers to as “truck karaoke” to have a good time together even while separated by distance.

While some of the women have lived on the truck with their partner, most have not. Even so, all recommend spending some time on the truck, e.g., a week or two. “They spend a lot of time alone,” they explain. “Keeping them company helps you understand what they do and helps them feel supported.”