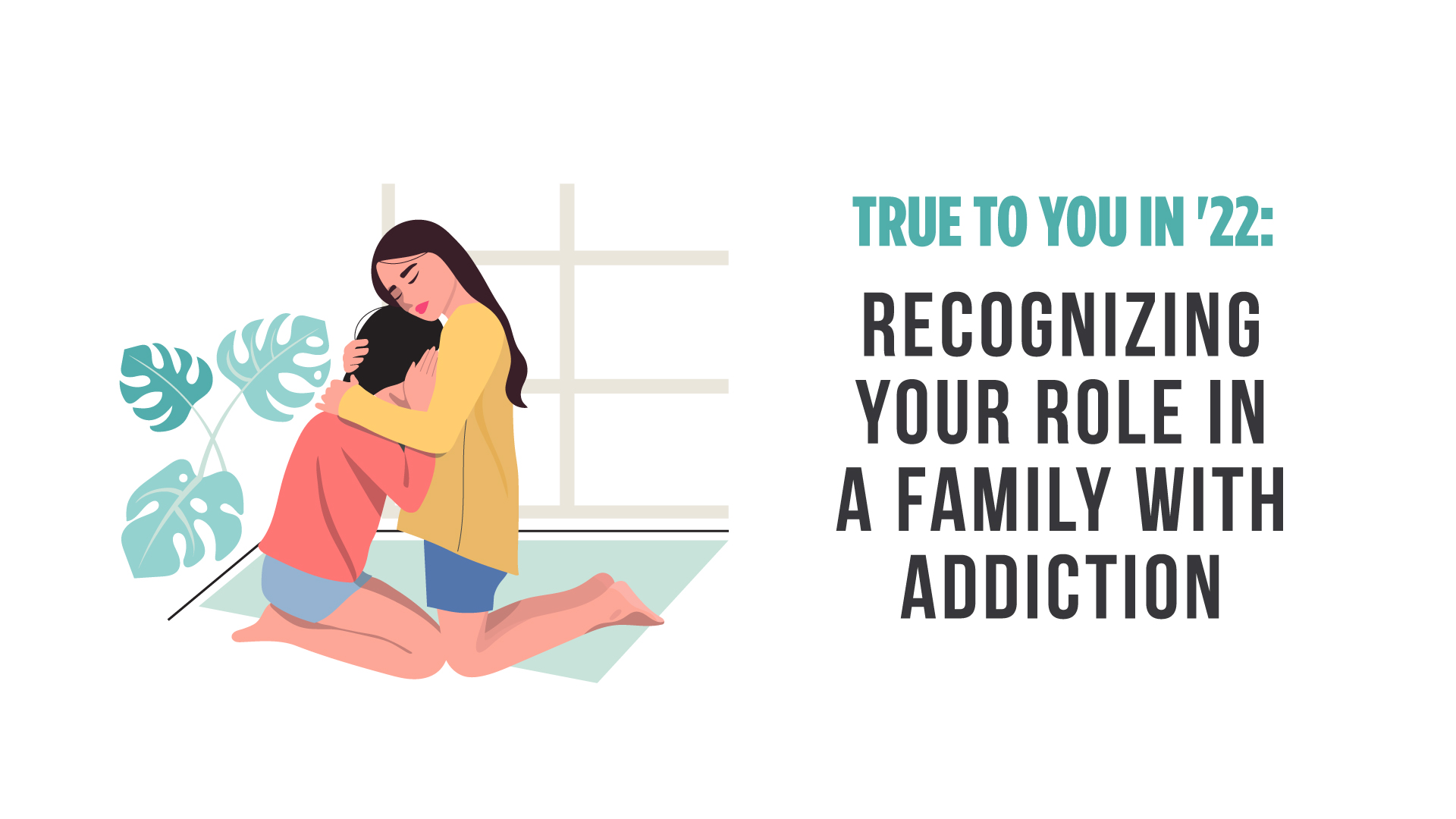 True to You in '22: Recognizing Your Role in a Family With Addiction

True to You in 2022: Family Roles in Addiction

For most of his life, it seems, Josh has been responsible for keeping the peace. It started when he was a child, negotiating conflict between his parents, especially after his dad had too much to drink. It’s not like he could get his dad to stop drinking. It was mostly that he comforted his mother and tried to keep her from lashing back at his dad. Even though he says he hates being in the middle, it seems as though he continues to find himself in the same position as an adult. When he’s not placating his aggressive boss, he’s continuing to run interference between his parents and his wife. He wonders, if it will ever end.

The impact of addiction extends much longer and further than family members realize.

Brooklyn has a reputation and it’s not good. Even when something is not really her fault, her past indiscretions put her in a position where it’s easy for others to assume she is the problem. She refuses to be tied down by restrictions or held back from anything remotely exciting most of her life. When Sam, Brooklyn’s dad, drank, it was a problem, but Brooklyn’s behavior distracted from that. Some people call her the “black sheep” of the family.

Marcus is a quiet person – so quiet you hardly know he’s around when you’re in a group with him. He has a way of blending in, especially when emotions are high. Get passionate about something, raise the volume of your voice even slightly, and Marcus fades into the background. It’s really not surprising. It’s something Marcus learned to do when his parents fought about his mom’s drinking when he was a child.

Calvin is the life of the party. He’s a lot of fun to be with, but Camille, his wife, complains that he can never be serious. “He’s always telling a joke,” she says. “We can never have a serious conversation.” Calvin learned to distract from his parents’ drinking by being funny. It sometimes worked when he was a child, but it doesn’t always work well as an adult.

The adult behavior of children from homes with substance abuse tends to follow predictable patterns.

Josh, Brooklyn, Marcus and Calvin are likely not aware that what’s occurring in their adult lives has a lot of do with what happened when they were children. As Adult Children of an Alcoholic parent (ACOA), their behavior falls into predictable patterns even though they no longer live in a home with someone who drinks too much. Sadly, the impact of addiction extends much longer and further than family members realize. Children from a household with at least one parent with a drinking problem are negatively affected, even if that parent is not physically or verbally abusive. Their adult behavior tends to follow predictable patterns. Here are the typical patterns you might see: 1) Hero, 2) Scapegoat, 3) Lost Child, and 4) Clown/Mascot.

The Hero: The firstborn is in a unique position when it comes to family roles. They have all of the attention for a short while and are usually asked to participate in helping when brothers and sisters come along. In a family where addiction is involved, the role of being responsible is often exaggerated and this responsibility often becomes the identity of the first born. In a family where mom or dad cannot be trusted and create unwanted attention, the Hero does whatever can be done to bring positive attention to light. The Hero often believes they have the power to change everything and are solely responsible for that change. They have a tendency to need praise, excel both mentally and physically, and are very dedicated to their families. Unfortunately, the Hero often hides his/her feelings from others, work too much, and have difficulty being vulnerable. It’s not uncommon for them to have health issues that revolve around stress, e.g. heart issues and strokes.

The Scapegoat: The Scapegoat recognizes early on that they are never going to live up to the “perfection” of their older sibling. With this realization they do what appears to be the next rational thing—they become the “bad guy.” Their behavior is usually the exact opposite of their older sibling. They tend to not do well in school, even though they may have the ability to do so. They could care less about helping the family; and they seem to go out of their way to get in trouble with the law. Scapegoats shift negative attention from the alcoholic or addict to themselves. They have a high degree of drug and/or alcohol use, high rate of crime, and a high rate of suicide.

The Lost Child: The Lost Child does not want to be seen and will do whatever can be done to be invisible to the world around them. They know life is chaotic and are full of hurt and pain, and will use whatever they can to escape from the harsh surroundings around them. They usually do not interact with the people around them, preferring drawing, reading, imaginary friends, and other fantasies as a way to escape. In adulthood these escape behaviors can be replaced with addictions such as drugs and alcohol, eating, pornography, sex, or overspending. Forms of escape are to mask their feelings and keep the emotions they are experiencing inside. The lost child may be very creative and smart, but experience depression and anxiety that interferes with success in life and relationships.

The Clown/Mascot: The last born, or youngest, grows up in an environment very different than the one experienced by his/her older siblings. They have been described as chameleons because they know how to “read the room” and be whatever is needed in the moment. They may use humor or “outrageous” behaviors to lighten a serious moment or distract from something unpleasant. When they are the center of attention, less focus is given to the behavior of an intoxicated parent. The Clown/Mascot struggles to be taken seriously as an adult and is often treated like the “baby” by the rest of the family. They often bear the weight of feeling like they have to “perform” at all times. The high rate of protection by the other members of the family can cause the clown to feel like they cannot do things on their own.

Even though ACOAs share many experiences in common, life is complicated and complex. Each individual’s experience of addiction and growing up in a family of addiction will have unique characteristics. It’s important to remember is that close association with a person who regularly abuses, or is dependent on, alcohol or drugs leaves its mark. These experiences shape adult behavior, emotions, and relationships. There is hope and healing. If you are an adult child of an alcoholic, consider these roles as a means of understanding your background and the door through which healing begins.