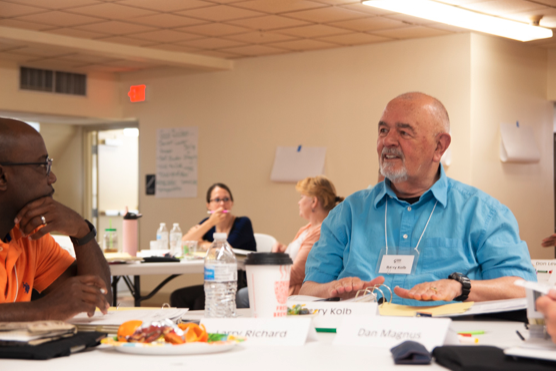 Barry Kolb of Branson, Missouri, attended the Good Dads Summer Training Camp this June because he knew his church would benefit from a curriculum designed for men.

Kolb is the leader and pastor at resTore in Hollister, Missouri. He and three others launched the church earlier this year, and they call themselves the resTore Corps—comprised of “a musician, a tech geek, a logistics guy, and a lead yapper, that’s me,” Kolb said.

Founded in the middle of one square mile of 1,328 of mostly low-income housing units, Kolb said the church’s location was no accident. The history of broken families and drug abuse was a perfect location to start a group, he said, because of the congregation’s goals of involving themselves in the community.

The group is different from other churches because they aren’t as focused on recruitment, Kolb said. Instead of trying to get others to join the congregation, the group is focused on going out into the community to make a difference.

When Kolb heard about Good Dads 2.0 from Good Dads Founder and Executive Director Dr. Jennifer Baker, a colleague of more than 35 years, it piqued his curiosity.

Kolb thought Good Dads 2.0, a 15-module curriculum designed for at-risk fathers, would be a good fit at the resTore’s new men’s group. He decided to attend the facilitator training so he could inform others in his community about the curriculum.

Plus, Kolb is no stranger to teaching. He’s been teaching in Angola prison in Louisiana for 25 years. The work he’s done there has spread to other prisons, and he said Good Dads 2.0 would work well for the guys he works with there, too.

Kolb said he always tells his Angola students that “things can change.” Even though the average sentence at Angola is more than 50 years, Kolb is optimistic that inmates can change in prison – and they can change the lives of others during their time, too.

Kolb himself is a great example of how things can change. He reminisced about his college years nearly 50 years ago, recalling how he was academically dismissed at the end of his sophomore year and later graduated with one of the lowest GPAs: a 2.08. Despite his poor performance, he kept learning. He’s since earned three master’s degrees and a doctorate.

Whether it’s prisoners in Louisiana or homes near his church in Hollister, Kolb is confident that men who have made mistakes can turn their lives around.

The deadline to sign up for our semi-annual training camp is quickly approaching! The weeklong camp is a great opportunity to network with other professionals, learn about new curricula, and catch the Good Dads vision. You’ll learn everything you need to know to facilitate courses Good Dads uses like Good Dads 2.0 and Within My Reach. Learn more about the Fall Training Camp here and register here.

Diana Dudenhoeffer is a multimedia journalist from Springfield, Missouri. She is a recent graduate of Missouri State University with a bachelors in Journalism. She started at Good Dads as an intern during undergrad, and now she works as the Good Dads Media Specialist, helping develop curricula, design products and create social media promos.