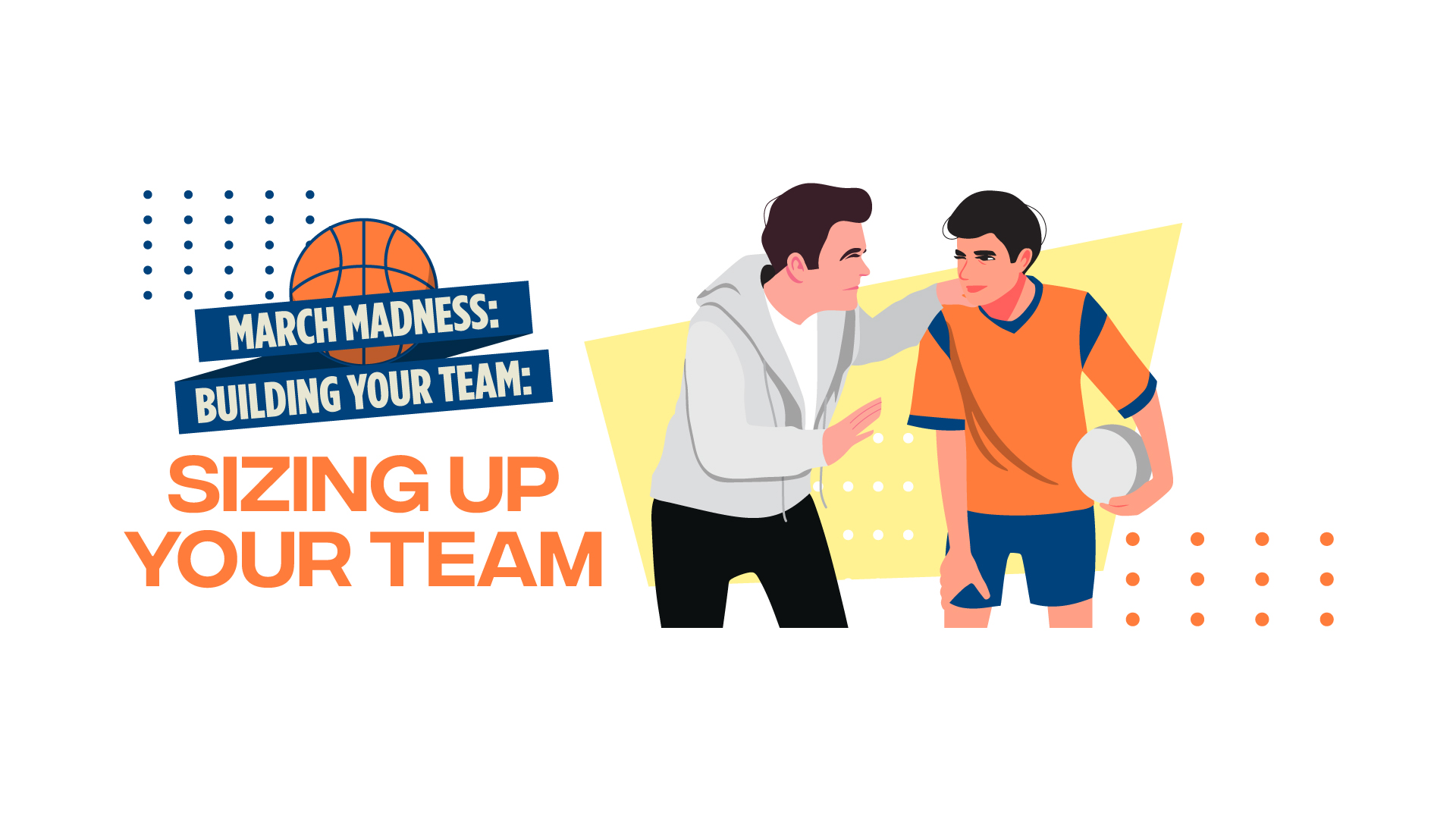 March Madness: Building Your Team: Sizing Up Your Team

Fundamentals of Fatherhood: Sizing Up Your Team

Every season, sportscasters and pundits spend considerable time speculating about the potential of various teams and their ability to produce a winning season. This is particularly so during the month of March when “March Madness” takes over and people try to decide who will make it to the Final Four of the NCAA Basketball Tournament. So much time is spent filling out one’s brackets and speculating who might have the lead that work performance and production actually goes down when March Madness begins.

Listen to commentators and you’ll hear them comment on the strengths and weaknesses of players and coaches.  They compare previous seasons and size up the competition.  They make predictions about who will go the distance and who will fade into the background.

In a similar way, people have plenty of observations and predictions when a child enters the world. “Look at those eyes,” they say.  “He may have his mother’s hair, but his chin is just like his father’s.”

As a child grows, others—and especially family members—suggest that long legs or a muscular physique mean a future in sports.  A bookish demeanor implies a future as a scholar or professor.  Nimble fingers and a “good ear” might forecast a future in music.

We love to make predictions based on the talent or ability we see in someone. We are also aware that a coach can have a lot of ability on his team but fail in his efforts to bring it together to accomplish the goal of a winning season. He may have the best raw talent in the world, but a lot rides on his shoulders if that ability can be mobilized to produce a winning season.

So how does a dad, the coach for his “Team Family” help his children become the best they can be? What are the strategies of winning coaches to bring out the best in the players they coach? We asked some great coaches in southwest Missouri and this is what we heard from them about the characteristics of a great coach and, by extension, a great dad.

Good coaching requires you to . . . make people do what they don’t want to do

so they will become who they want to become.

Being a Good Dad Requires … Courage and Consistency

Good coaches and good fathers share certain qualities or characteristics that help them be successful regardless of who is on the team or in the family. Some dads and moms have all-star kids. They come from the womb swimming in success. People marvel at their ability.

Most of us, though, have one or more children that struggle in some way. They require our humility, patience, persistence, and hard work to develop in positive ways. Being a good dad requires us to help our children do what they would otherwise not be inclined to do (e.g. homework, chores and good manners) so they will become what they want to become.

“Diversify your ability to work with different people.”

Just as a team has many players or members with varying degrees of skills or abilities, so a family is typically composed of at least two or more people with different personalities, abilities, desires and wants. A good father, like a good coach, develops his ability to work with more than one kind of personality.

Being a Good Dad Requires … Remembering Your Kids Are Always Watching

A good coach knows he is never “off the record.” His team is watching. Parents are watching. New media are watching. It may not be fair, but one mistake in conduct or communication can have a long lasting impact. A good father learns to guard his words so he can have the best possible impact on his children. When he does fail to communicate in a way he would like, then a sincere apology is the best remedy to words spoken in frustration or anger.

Being a Good Dad Requires . . . You Can’t Control Others, But You Can Control Yourself

Ask any good coach and they’ll tell you it can be hard to stay in control of your emotions when the game is close and the energy is high. It is essential when others get worked up too. Someone must keep their cool when tempers rise. Good dads know that person must be them. They can’t control a three-year-old having a tantrum any more than they can a thirteen-year-old meltdown. They do, however, always have the option of controlling themselves.

As you consider your March Madness bracket this year, you may want to consider the coaches. What coaches, in your opinion, bring out the best in their players? How can you be that kind of “coach” to your team family? Stay tuned during the month of March to learn more from our Fundamentals of Fatherhood: The Essential Good Dads Playbook.