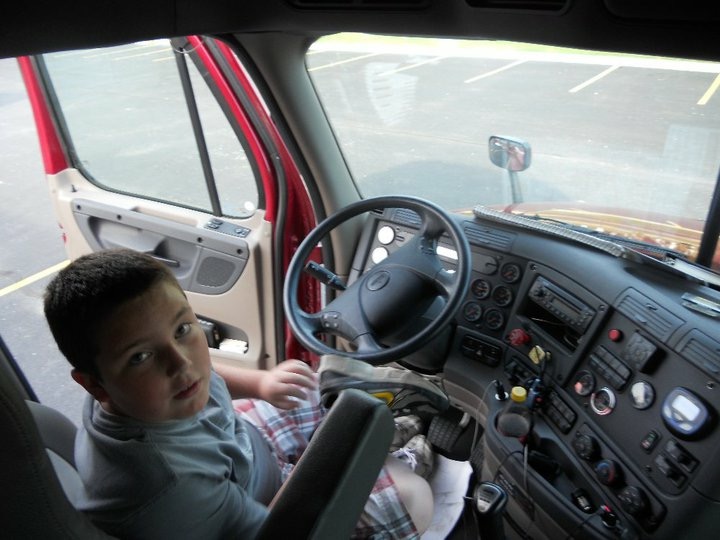 There are a number of ways to stay connected with your family when you’re an over-the-road driver, but making music while miles apart is not usually one of them. And yet, that’s just what George Niehaus, Prime CDL Instructor, does with his son, Jared.

George has been a long-haul driver for nine years.  Not long after he began, Prime asked him to become an instructor. Today George trains Prime drivers to become CDL instructors, i.e., “teach the teachers.” This is a position he has held “in house” for the last three years.

George became a driver when the market collapsed in 2008. He had been working the same job in St. Louis for 13 years when he suddenly found himself with nowhere to go. He saw ads for truck drivers, knew his grandfather had driven a truck for 40 years, and figured driving meant stable employment. He chose Prime because they paid for his training at a time when he was short on funds. Initially, he planned to drive for Prime for a year to repay his loan and then return to St. Louis to work as a crane operator. After his first year, he couldn’t see himself going anywhere else and decided to stay.

George speaks very highly of the training process at Prime and their ability to transform new drivers into competent, long-haul drivers.

Making Music Together
George now lives with his son, Jared (18), in Springfield. Jared will begin college this fall and George is particularly proud of the way he has been able to provide for his son’s education and future. He talks about how close he and Jared are, including their shared love of music. “Even when I was on the road,” he says, “we connected through music over Skype.”

George plays the guitar; Jared plays the guitar, bass, banjo and violin. Understandably proud, George claims that Jared is “far beyond me on the skills level.” As his skills grew, the two of them began to make music together even though they were far apart geographically and this helped to create a lifelong bond between the two of them.

“I think he just wanted to be like me and do what I do,” and explains how he taught Jared to play via Skype and/or FaceTime, showing him chords and techniques for the guitar. “The next thing I know,” he laughs, “I come home and he’s playing better than me.”

According to George, Jared sometimes chides him for not practicing enough so the two of them can play something together.
One summer George brought Jared on the truck with him when he had a load to Florida. On that trip, George says his truck “mysteriously broke down” and he was able to surprise his son with a weekend visit to Disney World. He still laughs when he recalls how surprised Jared was to see where they were going.

Staying Connected with Your Kids
When he was an over-the-road driver George was in Springfield about once a month, time he used to stay connected with his son. He admits that being away from home is a sacrifice, something he calls “a short-term sacrifice goal for a long-term goal.” He credits his mother with encouraging him to see that certain choices are called “a sacrifice for a reason,” it’s what you do when you have plans for a better outcome later on.

George insists that planning for home time is essential to good performance as a long haul driver. Routine maintenance on one’s family relationships is just as important as maintenance on your truck. “You’ve got to do it,” he says. “Be sure you make time for it.”