How to Ruin a Perfectly Good Relationship . . . or Union 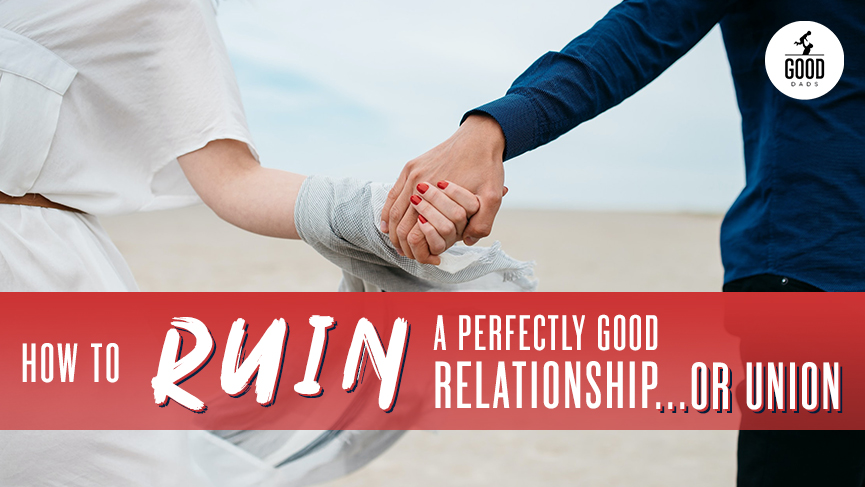 Once upon a time there were two people who fell in love. Reba thought Demetri was the handsomest beau on the planet. Demetri dreamed of the world he and Reba would build together. The two acknowledged they had differences—something their friends and parents were only too quick to point out, but they didn’t care. They were smitten with each other and only imagined what wonderful things would happen as a result of their joyful union. One hot July day, over the protests of their parents, they married and made it official. They were now Demetri and Reba Armani. They were madly in love and so happy to be starting life together that they naively thought the hard part was over. (After all, it’s not easy to disappoint one’s parents.) The truth was, the hard part had just begun.

Suddenly the young couple was beset with all kinds of challenges they hadn’t fully expected. There were money issues, friend and family issues, parenting issues, and who-is-responsible-for-what issues. They knew relationships require work, but as they tried to navigate all the complexities of their new union, they fought a lot more than they ever imagined. In fact, their conflict was often nasty and unproductive.

Demetri, the more tender-hearted of the two, insisted on helping every troubled person who came to their door. Reba, a practical and security-oriented soul, objected to Demetri’s generous nature. She reminded him that winter was coming; they had children to feed; and they needed to save some of what they produced and harvested for themselves. Demetri believed those less fortunate than them had just fallen on hard times. Reba pointed out that sometimes people bring trouble on themselves and benefit most from experiencing the consequences of their poor choices.

Round and round the two went, arguing and bickering from sun-up to sundown. Things were not good. Finally, at the suggestion of a good friend, they called upon someone who specialized in helping people have healthier relationships. Both Demetri and Reba wondered if she could really help them. They still had strong feelings for each other and wanted a happier, more peaceful union, but after all the hateful things they had said to each other over the years they wondered if this was possible.

In their first visit with the relationship healer, they learned that wise men had identified four patterns of communication that spell death for healthy relationships. Sadly, Demetri and Reba recognized all four patterns in their interaction with each other. Here’s how it typically looked for them:

Reba: “Where’s the money you were supposed to give me for our savings account? I shouldn’t have to remind you. If you cared about us, you’d remember yourself.”

Demetri: “I can’t believe you can say that after we agreed to help your cousin out last month. If you paid attention to something besides our bottom line, you’d see the people hurting around you.”

Demetri: “Wow. You know, you’re lucky I am soft-hearted. It takes someone like that to put up with the likes of you all these years.”

And on, and on, and on they went... Reba arguing for rules, standards, structure and security while Demetri focused on what he viewed as care, compassion and concern for others. The truth is, both are needed, but the way Demetri and Reba talked to each other destroyed the thing they needed most—cooperation.

Here’s how the relationship healer described the couple’s negative pattern of interaction when they didn’t agree:

1) Reba escalates the tension between herself and Demetri by expressing her worries in a harsh and accusatory manner (e.g. suggesting Demetri doesn’t care about her or their children).

2) Demetri is quick to invalidate, i.e. dismisses, Reba’s concerns and attacks her character (i.e. overlooking a real problem and focusing on other issues like helping her cousin).

3) Reba ups the ante (more escalation) in their conversation, suggesting Demetri’s action will cause them to neglect their children and be a burden to others.

5) Eventually one or both withdraw and avoid any future attempts to resolve their difficulties.


Escalation, invalidation, negative interpretation, withdrawal and avoidance—these four negative patterns of communication destroy all the good things in any relationship—intimate partners, business associates or a political process. The relationship healer suggested the couple would need to find ways to handle conflict in a safe way or else they might eventually tear apart everything of value they held dear.

Eventually, Reba and Demetri became so sick of fighting they decided they wanted to learn to do something different. They knew it wouldn’t be easy, but they could see their children, their business, even their health would suffer in the light of unresolved stress and strain. It took practice and dedication, but overtime they learned to talk with each other in ways that emphasized listening more and talking less. They also discovered how to keep the good things they had together going even when they didn’t agree. It definitely wasn’t easy, but given the alternative, they were willing to fight for what they wanted most—a happy, healthy union.