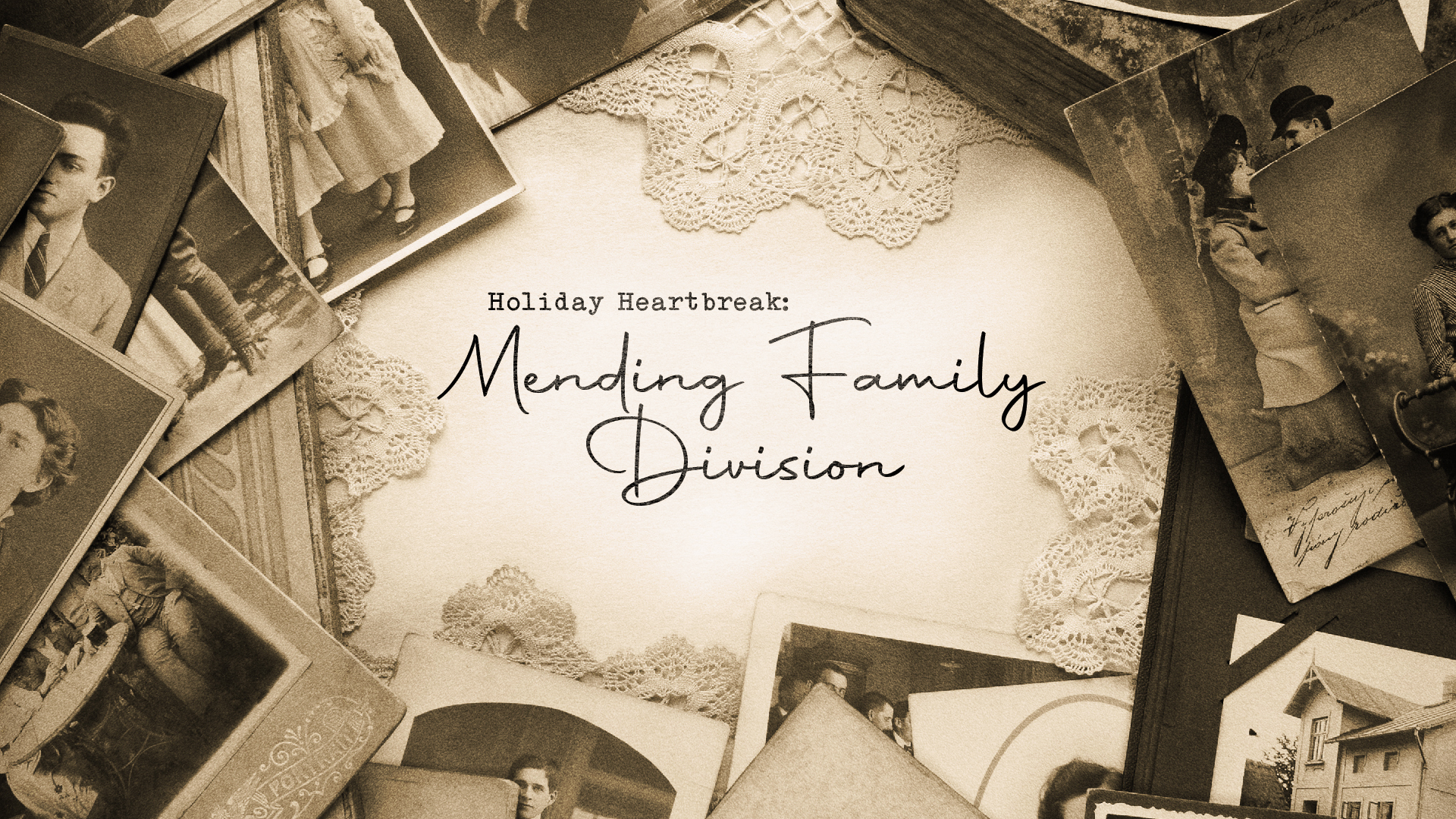 When Matt looked out the window and saw red and yellow leaves piling up around the old swing set in the backyard, he was reminded of the approaching holidays and the sadness he felt. It wasn’t just that COVID would make some of the usual activities and celebrations difficult. It was also the division and dissension he and his wife were feeling within their own family.

The swing set was just one more reminder of happy days in the past. He thought about the fun he had building the structure for his kids. They had laughed and played and even argued over who would go first, who got what swing, and how to go down the slide. Yes, there were scrapes and struggles on the swing set, but at the end of the day everyone made up and went to bed happy.

How, Matt wondered, had they managed to get to the place where the distance between family members had grown so great that children who once played happily together wouldn’t even enter the same backyard? How did children who snuggled under the covers together to hear a bedtime story and concoct enough mischief to drive their parents crazy, now maintain such division between them?

He knew some people blamed the country’s political rancor. Even in close families, disagreements occur and not everyone wants the same outcome. Others suggested that the corona virus was the primary culprit, in that the need for social distancing made it easier for family members with prickly differences to stay further apart. Perhaps it was just the underlying social contagion that seemed to make nearly everyone anxious and distressed.

Matt thought about something he’d heard recently from Jon Gordon, a speaker and bestselling author of business books.  In The Garden: A Spiritual Fable about Ways to Overcome Fear, Anxiety, and Stress, Gordon describes the “5 Ds” and how they contribute to our distress. Matt wondered if these “Ds” might be impacting the tensions in his family.

Doubt: We doubt the intentions of others. We attribute to them motives and meanings not truly representative of their character and values.

Distortion: Rather than trust our experiences with others—the totality of our time with them—positive and negative, we begin to distort what we know about them through the lens of doubt. We negatively interpret their words, actions and behavior while giving ourselves a pass. We assume we know what “kind” of person the other is, rather than trying to understand their perspective or influencing experiences.

Discouragement: Trying to understand someone who thinks about the world differently takes work. It’s much easier to stick with the people, customs and beliefs you know. Perhaps that’s why we so easily become discouraged when we can’t get someone to think like we think. When we’re discouraged, we tend to give up trying to make things better.
‍

Distraction:  “Fine,” we say, “If that’s the way s(he) thinks, then I don’t need them. We can have fun without them. We don’t need them to celebrate.” Distracting one’s self from things that hurt, that are painful to experience, is a common American preoccupation. It doesn’t really solve the problem in the long run, but it may help ease the pain in the present. It may also underscore the growing divide.

Division: And then there’s the great divide . . . the parting of ways . . . the lack of communication and interaction. By this time confirmation bias, the tendency of people to favor information that confirms their existing beliefs, is in full throttle. In fact, even if the other party does something nice or favorable, their behavior is labeled a fluke, exception or perhaps even manipulative. In fact, confirmation bias gives more weight to evidence that confirms one’s beliefs and undervalues evidence that could disprove it. And, not surprisingly, the effect is stronger for emotionally charged issues or deeply entrenched beliefs.
‍

The Space Between Us – Sarah Anderson

After considering the five Ds and the damage they were doing in his family, Matt felt some relief when he heard about a new book by Sarah Anderson entitled, The Space Between Us. The child of highly visible, political parents, Sarah offers rare insights on how to move from rage and distrust to understanding and compassion—changes associated with peacemaking and bridge building. Here are a few insights from Sarah:

1) Instead of asking “Why can’t you be like me?” say “Help me understand your perspective.”  Ask yourself whether it is more important to be “right,” or to have influence. This doesn’t mean you have to give up on what you believe, but it does suggest that aggressive declarations will likely have a diminishing return relationally.

2) Listen, reflect what you hear, and ask clarifying questions to make sure you understand what is being said.

3) Embrace, rather than avoid, conflict. Engage in civil discourse. Sarah suggests civil discourse is a muscle that requires practice, i.e. it atrophies if we withdraw from and avoid difficult conversations.

4) Understand the difference between “peacekeeping” and “peacemaking.” Peace by submission and domination (peacekeeping) is different than peacemaking, which involves bringing together different perspectives and choosing the best for the good of all.

5) Choose names over narrative. Once a story is told about a person, we tend to associate the person with that one story, assuming it tells us everything about them. Bridge builders focus on the whole person—their likes and dislikes, their values, ideas and hobbies. Seeing someone as a fellow human being, versus a systems of beliefs, helps us avoid depersonalizing them with a preconceived narrative.

It won’t be an easy holiday season this year, Matt thought. Lots of things will be different and there’s a lot that cannot be changed. All the same, he reflected, there’s no reason I can’t be the person I want to be. When it comes to me, Matt thought, I can work on building bridges and mending fences. I don’t have to give up what I believe, but I can be open to working on gaining a better understanding of others.

Sarah B. Anderson, The Space Between Us   https://sarahbanderson.com/home/