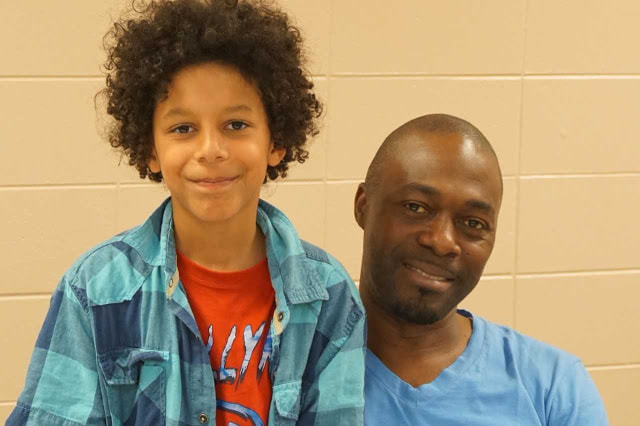 ​At 47, Joe Ndiba describes himself as an “older dad.” He is also as a highly engaged, proud father of four. His first two children, a 22-year-old son, and 19-year-old stepdaughter are out of the house, but still at home are William (11) and Logan (9). With these two, Joe finds himself involved much of the time. Although he wouldn’t necessarily describe himself as “low-volume,” he does consider his focus as a father to be on “high quality” parenting.

“Kids don’t come with a manual,” he says. “Even if they did, dads might not read it.”“Having babies,” he quips, “is a lot like making pancakes. You burn the first two before you get it right.” Perhaps that’s why Joe is trying so many different things with his boys. This includes being attentive to his son’s behavior, their education, and their experiences.

​A significant part of the time Joe spends with his sons includes activities associated with Springfield Taekwondo Academy, and their behavioral development. Taekwondo is a business he owns and operates in addition to his work as a representative for Follette School Solutions. Joe says his boys spend a lot of time at the academy with him and his oldest, William (11), even assists him with helping train the younger and less experienced children. It is just one of the ways he helps to instill self-confidence in them.

In order to do this, Joe says he tries different strategies depending on the needs and personality of his sons. One son excels in math and the other in reading.

“Increasing self-confidence,” he says, “is a father’s job. I try different tactics to teach them. With one boy I spend time reading. I ask him to tell me various words on signs when we’re driving in the car. With the other, I make up problems. I discovered that sometimes it’s just a lack of self-assurance.

“What do I want these children to become?” Joe answers this questions for himself through involvement in his sons’ lives, engagement in their activities – a number of avenues to help them learn and discover, along with him, who they are. This includes cooking with them and taking them to school, in addition to working with them at the Taekwondo Academy. He does not expect perfection from his children, nor does he want them to feel pressured, but he does hope to raise sons who are trying.

Laughter is a big part of their interactions. Joe describes both his boys as “hilarious” and “jokesters.” They love having fun with their dad. As an older dad, Joe says he doesn’t have much energy to yell and scream. Instead, he believes his sons learn more through laughter. He believes this is a quality that will help him sustain a great friendship relationship with his sons as they age.

“They still know who’s in charge,” he explains, “but that doesn’t mean they don’t try to get their way.” He says that his oldest, in particular, often offers to “egotiate” when things are not quite as he would prefer.

Joe offers two words of encouragement to other dads: