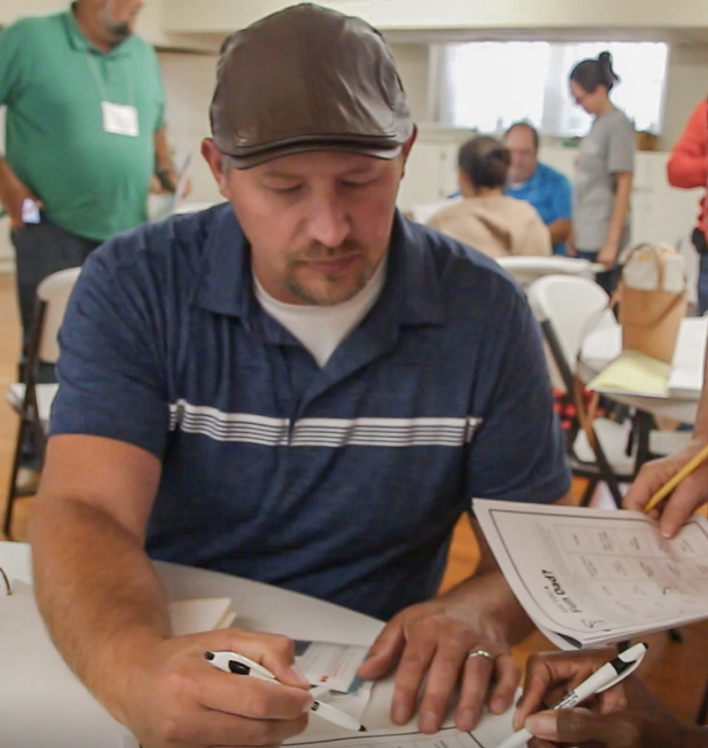 Good Dads 2.0 reaches fathers who need it most

Will Barrett works with the Jasper County Missouri Sheriff’s Office. One thing he noticed in his 15 years with inmate populations is this: Most of the men in prison don’t want to be in the position they’re in. They don’t want to be in trouble with the law. Time and time again, Barrett says, he sees poor circumstances lead to poor decision-making, putting men on a negative course despite not wanting to make poor choices.

Many of the men Barrett encounters in his work aren’t equipped with the tools they need to be vital members of society. Some don’t know how to be good men; they rarely have positive experiences with manhood. But as Barrett begins to get familiar with them, share with them, and develop trust with them, they start to buy in to what Barrett tells them.

That’s where Barrett wants to make a difference. He said he has a real heart for the inmate population and is passionate about getting dads back on the right path. Given the vital roles dads play in society, Barrett said, Good Dads 2.0 is going to create a lot of positive changes for the men with whom he works.

In a new Jasper County facility with emphases on treatment and rehabilitation via substance abuse classes, Barrett is in a position to help dads, one of the most important and often dismissed elements of the family unit. The way Barrett sees it, dads owe it to their families to stop negative cycles of violence—for the wellbeing of their kids, for themselves, and for the rest of society.

However, incarcerated men face many barriers to becoming good dads: A lack of resources, housing, transportation, and funding all make it harder to make positive changes in one’s life. Plus, many of the men Barrett works with have burnt bridges with family members, and they often can’t find employment. These barriers mean men seeking basic human needs are left with no other option than to perpetuate cycles of violence, which can land them back in prison.

That’s why he’s so excited to bring Good Dads 2.0 to Jasper County.

The lessons Barrett teaches in the prison aim to reach men who were never exposed to positive role models when they were growing up. When all you know are cycles of incarceration, violence, and addiction, all the elements of your life spin out of control, Barrett says, and it can be much harder to be a good dad. Good Dads 2.0 is founded on many of the same values as Barrett’s work. Good Dads knows when fathers don’t have strong male figures in their lives to model good decision-making, it’s easy to fall into cycles that can land you in prison.

As Barrett completed the facilitator training at the Good Dads summer camp this June, he said he found the curriculum to be especially relevant to the men in Jasper County. He said the lessons bring to the forefront issues that many of the men he works with may not have had the opportunity to consider before. He said he was “excited” to see his inmates developing skills from Good Dads 2.0 that can give them an avenue to talk about their feelings, which Barrett says is the first step in recovery.

Once back in Jasper County after the summer training camp, Barrett will start over his men’s group from the beginning, this time with Good Dads 2.0. He said the course is easier to follow, more tangible, and less confusing than how he was previously running the group. He imagines his men will get more out of it compared previous discussion-only format as the new course gives them something they can and watch and a handout from which to work.

Historically the broad strokes of American criminal justice have focused on incarceration only, Barrett said, instead of rehabilitation. The framework for most prisons today is based on one truth: Breaking the law results in penalty. But Barrett says there’s room for positive, systemic changes that can help incarcerated dads, too.

If someone doesn’t pose a threat to society, it’s worth looking at alternative sentencing avenues, he said.

Barrett’s rehabilitative work, which he calls an “emotional adventure,” is rare in many parts of the American justice system, but he’s found that inmates are both receptive to men’s group activities and are eager for an outlet to talk. Barrett said that talking is critical to healing, even though it often opens up old wounds.

“Only holding back (your) feelings is no good,” Barrett said.

He suspects his participants will run the gamut of emotions during Good Dads 2.0 since the questions are thought-provoking and prompt participants to dig deep.

While Barrett sees prisons as a necessity—and maintains that there is a proper place for criminals—he also recognizes there are many inmates willing to change.

Once you’re willing to change, you have the opportunity to change your life, he said.

The deadline to sign up for our semi-annual training camp is quickly approaching! The weeklong camp is a great opportunity to network with other professionals, learn about new curricula, and catch the Good Dads vision. You’ll learn everything you need to know to facilitate courses Good Dads uses like Good Dads 2.0 and Within My Reach. Learn more about the Fall Training Camp here and register here.

Diana Dudenhoeffer is a multimedia journalist from Springfield, Missouri. She is a recent graduate of Missouri State University with a bachelors in Journalism. She started at Good Dads as an intern during undergrad, and now she works as the Good Dads Media Specialist, helping develop curricula, design products and create social media promos.