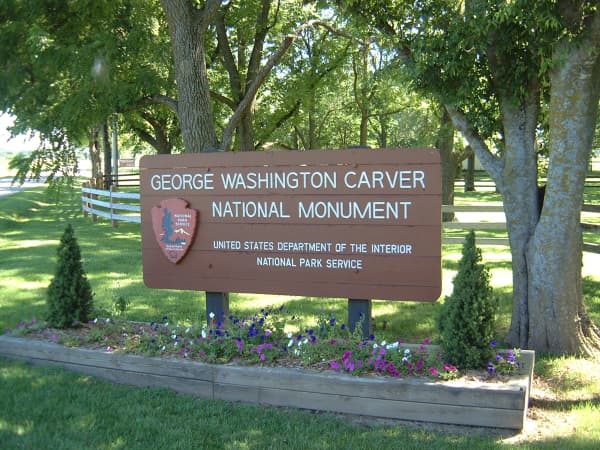 Have you ever had a free day with the kids and needed a new place to take them? Consider a beautiful spot about an hour from Springfield, loaded with opportunities to explore nature, let out some energy, watch tiny fish in a stream, and count turtles on a log. Imagine the people who used to live in a large farmhouse, picnic in the woods, chill out in the air conditioning while watching a good film, and cruise a museum and discovery area. Dads and kids can do all of this while learning about a youngster who grew up in Missouri and went on to become a famous American: George Washington Carver. Spend a fun AND educational day at George Washington Carver National Monument. George Washington Carver, the renowned African American scientist and educator, is known for his work with agricultural products, especially sweet potatoes and peanuts. Schools are named for him, books are written about his life, and his birthplace became a unit of the National Park Service. His life story is inspirational.

Enslaved at birth, kidnapped by nightriders, critically ill, and raised without either of his parents, Carver’s life could have taken a very different direction. The people who invested in him and helped set him on the path to achievement are exemplary and worthy of consideration for the impact they made on the lives of others.

Carver’s life began near the end of the Civil War, during the grim time of slavery. His mother, Mary, was enslaved on the farm of Moses Carver in Newton County, Missouri.  His father died when Carver was an infant. Near the end of the war, Mary and baby George, and possibly a sister, were kidnapped by outlaws. Carver was ransomed for a racehorse and returned to Diamond, MO, with an illness that could have killed him. Carver never knew the fate of his mother.

When he reached about 10-12 years of age, Carver determined to move to Neosho, MO, the nearest town with a school for African American students. This decision set his feet on a path that would lead him through many fearful and difficult times on the way to achieving his goal of earning an education. Two very important people impacted Carver during this time and shaped the direction of his future – Mariah Watkins and Stephen Frost.

Mariah Watkins, a midwife with a keen eye for children, lived with her husband near the school Carver attended. They took in the orphaned teenager as one of the family. When Mariah saw Carver’s determination to gain as much education as possible, she gave him the charge to learn all that he could and then go out into the world and give his learning back to the African American community. She planted an idea that would later bear much fruit in his life and in his career.

Stephen Frost was Carver’s first formal teacher in Neosho. Born enslaved and given very limited education and training to be a teacher, Mr. Frost gave Carver a merit award for perfect studies and good conduct before Carver’s thirst for more knowledge led him to another school.

What if these average people had not extended a hand of kindness to this young teen? By looking at the impact of their investments in the life of an orphaned, homeless youth in search of education and purpose, it is easy to see the difference they made in his life and in the lives of his future students. This youngster from southwestern Missouri was mentored and later became a mentor. Young people learning about Carver may find connection to aspects of his life. Adults may find connection to the mentors in their own lives. Make plans to visit George Washington Carver National Monument with the young people in your life and invest a day learning about the famed scientist, teacher, mentor, and humanitarian.

Diane Eilenstein, Supervisory Park Ranger at George Washington Carver National Monument, loves all things history. A favorite mentor was her fourth grade teacher, who read history books to the class and took them on a field trip to Laura Ingalls Wilder home in Mansfield, MO . This opened Diane's mind to the possibility of a career teaching young people and working with historic sites. She met the National Park Service during college and now enjoys sharing stories of the park's history with thousands of schoolchildren each year. "We can shape the future by teaching the past to our youth." Diane can be reach for questions or comments at diane_eilenstein@nps.gov.