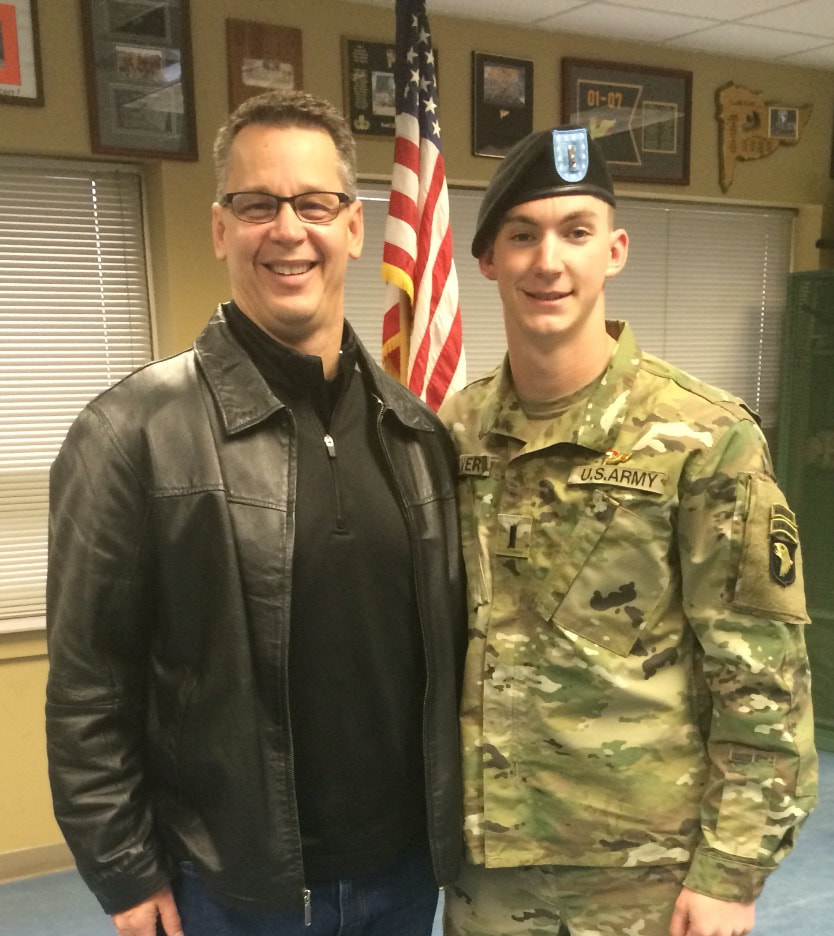 Kevin Weaver (Dad): Recently, my middle son, now a married father of two, as well as an Army infantry officer with the 101st Airborne, sat down and penned some thoughts regarding his upbringing, as well as my involvement in it. I am going to be honest, I was taken aback by his somewhat rave review. In hindsight, it would appear that I was some sort of super hero to the boy, when in truth, I often failed…miserably. This same child challenged me more than my other two boys, combined, and I went to bed, many a night, feeling I had been too hard on him. I don’t share his musings to prove what a great dad I was, I share it as a testament to the fact that even though we often believe we are doing nothing but failing our kids, the good stuff is still taking root. Hopefully, you will be encouraged, and not discouraged, by what my son has to say. And perhaps his account proves what my wife and I like to say, “Sometimes, you feel that your kids turn out well in spite of you, not because of you.” Kevin Weaver

​Keith Weaver (Son): A father holds his family accountable and must show his children that there are consequences for our actions. I think this is especially important for a father to teach to his sons. With my dad there was no question where the line was drawn, and when the line was crossed my brothers and I knew we had made a mistake. Wrongful action equals consequence, no question about it.

I don’t remember testing my father or pushing the limit to see how much we could get away with. He did an incredible job proving the disciplinary action my brothers and I received was because he loved us and that he was going to do everything in his power to help us become the men God made us to be. No matter how old we got, my dad relentlessly pursued doing what he needed to do to teach us a lesson if we messed up or acted out of selfish reasons. After every punishment we received my father always told us he loved us and why he held us accountable.

We so lack this kind of discipline in our society today. My generation is often so far removed from giving the slightest care as to how their actions can affect others, and even themselves for that matter. I’m generalizing but it seems to me that there are a minority my age, who know how to show respect and think before acting out of emotion (most of the time). Above all we need to know how and why God wants us to live a certain way and abstain from certain actions. I strive to hold my own son and daughter accountable for their actions according to God’s standard as my father did for me. I cannot stress how important the disciplinary action I received from my dad was in shaping me into the man I am today.

Keith: Unwavering Faith
Through all my father has done for me, and in spite of all the sacrifices he’s made, the most important thing he has done for our family is show us what it is to be a man of faith. Unwavering faith in God on display was, and is, something my life never lacked from my dad. He and my mom have tirelessly and continuously done all they can to further the Kingdom of God. How blessed am I to have a father who’s life’s work is to share God’s love with as many people as possible! His love for God and his love for people have been so evident my entire life.

I now strive to be even half the man of God my father is. He has shown how a man should treat his wife and how a father should raise his children and I pray that my family can experience what I’ve experienced through the example my father set for me.

Kevin: If my son’s thoughts prove anything, it proves this…our efforts, even the ones we think our substandard, seem to make a powerful impact if we do them in love.

Kevin Weaver, CEO of Network211 and father of three sons, lives with his wife KyAnne in Springfield, MO. He enjoys spending time with family, hunting and watching University of Kansas basketball with his boys! He can be reached at kweaver@network211.com. Keith Weaver is stationed at Ft. Campbell where he was recently recognized as an "Honor Grad" for Pathfinder School, one of the toughest in the Army.  He is currently the OIC of Headquarters Battalion, and serves as the Platoon Leader for the Recon Platoon.