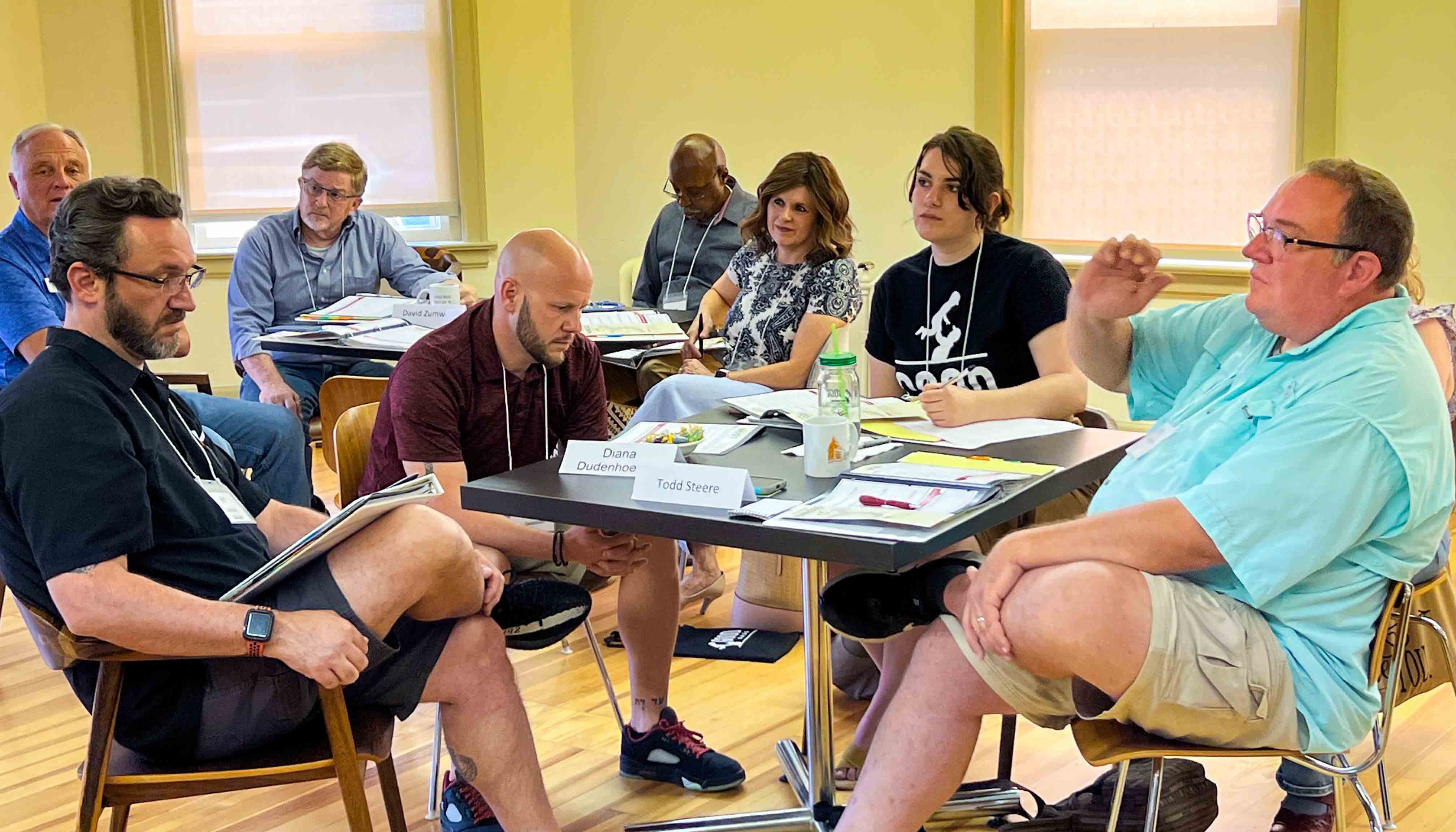 This blogpost marks the second week showcasing snapshots from the Good Dads Summer Training Camp, a five-day workshop hosted earlier this month. Social workers, Good Dads facilitators, faith leaders, counselors, and many others from around the region who want to improve their working relationships with fathers gathered at The Downtown Church for a common purpose.

The curricula the team taught – Fundamentals of Fatherhood, Good Dads 2.0, and Helping Fathers in the Heartland – all included thought-provoking questions, engendered meaningful conversation, and sparked a sense of togetherness in leaders and participants alike. Attendees can attest to this: Throughout the week’s sessions, the room was consumed by a purposeful energy and excitement about the material.

As I looked out at the clusters of people at each table, I was stricken by both the similarities and the differences I noticed among the folks seated throughout the space. We were all so different in that we each had unique experiences and motivations that brought us to the training camp. We had stories and perspectives that made our outlook different from that of our neighbor’s.

But while our motivations may have been different, attendees were all similar in that our goals were the same. Everyone in the room that week cared about dads, believed in the positive impacts of engaged dads in their families, and were (and are!) all willing to put in the work necessary to make the world a better place for kids, one dad at a time.

I spent the months leading up to the training camp working closely with Dr. Jennifer Baker and the rest of the Good Dads team to get the Good Dads 2.0 and Fundamentals of Fatherhood curricula completed (or as close to completed as possible). I thought I knew the lessons backwards and forwards, and it is true that I know the material fairly well, but I discovered at the training that I have much more to learn.

I was delighted to see participants engaging with material that I had a role in creating. I saw folks asking critical questions, digging deep into the lesson, sharing personal stories, encouraging one another – and I’m so grateful for that. I’m even more grateful that I saw people interacting with the material in ways I’d never previously considered. Each person brought something unique to the table, and that’s why I think these curricula are so powerful.

The theme of the training camp, for me, was togetherness. We physically came together safely, a big feat in the era of COVID-19. And we grew closer emotionally, though empathizing with others’ stories and learning from others’ advice. Safe to say, if you didn’t make it to this year’s training camp, you missed out.

Facilitators begin the first day of the Good Dads 2.0 training by listening to Good Dads Founder and Executive Director Dr. Jennifer Baker as she introduces the curriculum during breakfast on Wednesday, June 15.

Peter Magnus speaks to his tablemates during an activity in the first module of the Good Dads 2.0 curriculum on Wednesday, June 15.

Larry Richard, a facilitator with Good Dads, Kansas City, uses a blue marker to write a split-second impression of Single Parent Moms on a piece of newsprint on the wall of The Downtown Church. In the activity about stereotypes, facilitators were directed to write mainstream perceptions of around a dozen demographics.

David Zumwalt, with Good Dads, Kansas City, uses a space in his facilitator manual to jot down notes on the lesson and reflect on the material in the Good Dads 2.0 module on Friday, June 17.

Groups of facilitators brainstorm answers to questions in the Fundamentals of Fatherhood curriculum on Monday, June 13.

Wayne Cochran, a retired Army officer and current resident of Lebanon, justifies his stance on a controversial statement in an exercise on values. In Module 2 of the Good Dads 2.0 curriculum, participants read a statement like: “A man who shows his emotions too much should be considered weak,” and then move about the room to illustrate their stance on the prompt, i.e. the north side of the room was “strongly agree” and the south side was “strongly disagree.”

Diana Dudenhoeffer is a multimedia journalist from Springfield, Missouri. She is a recent graduate of Missouri State University with a bachelors in Journalism. She started at Good Dads as an intern during undergrad, and now she works as the Good Dads Project Assistant, helping develop curricula, design products and create social media promos.