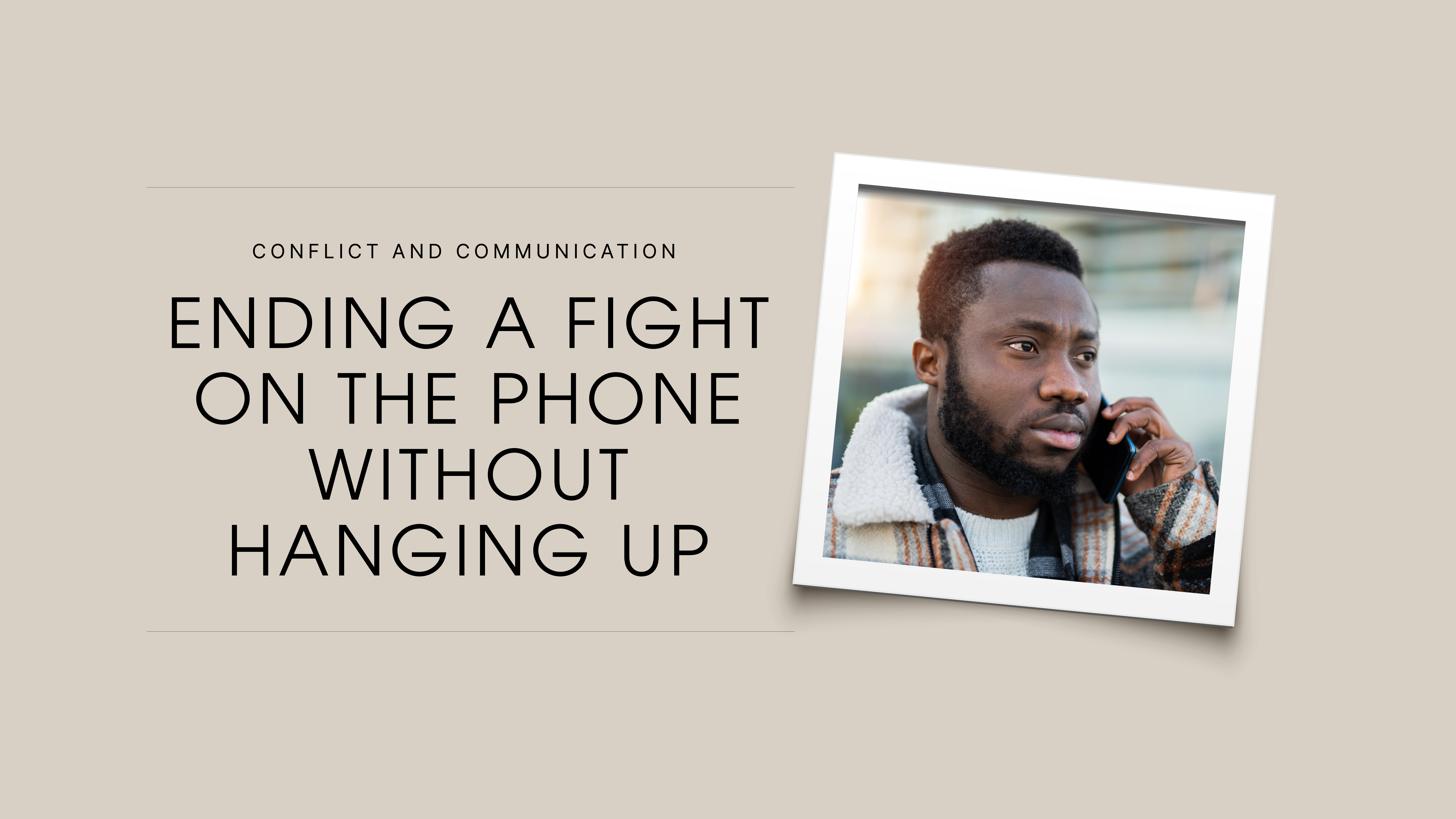 Conflict and Communication: Ending a Fight on the Phone Without Hanging Up

“We were talking on the phone and she just kept yelling at me, so I hung up on her.”

“In retrospect, I probably shouldn’t have hung up on her, because it didn’t go well and things only got worse. She continued to blow up my phone with text messages and nothing got resolved.”

Ever Hung Up on Someone?

I’m not proud to admit it, but I have. In the moment, it seemed like the only way to escape the verbal barrage. I could feel the blood rushing to my face and my muscles tighten. I wanted to escape what I felt were very unfair remarks. There was no place to run and I couldn’t defend myself, so I hung up.

I’ll admit, it wasn’t a mature behavior. It didn’t resolve the problem. It only added one more thing to work through when the conversation resumed at a later time.

Not long ago I had an opportunity to handle myself better in the face of a yelling-at-you-on-the-phone kind of person. Granted, I did not know the yeller personally. We had never met, but I did need to work with him to resolve a problem so I knew it would be unwise to yell back (really not my style) or hang up (more my tendency).

The conversation started off pleasantly enough, but abruptly took a turn in the wrong direction when I asked a question he didn’t like. Suddenly, he began berating me, accusing me of doing things I had not done, and generally going over the top with his emotions. I’ll admit it. I was taken aback and definitely thought, “I don’t deserve this. I should just hang up.”

Fortunately, I was able to calm myself and respond in a way that helped move him from ranting and raving to a steadier state. Here’s what I did.

I let him talk and talk and talk. My only response was something like, “Wow. That sounds hard. I can imagine how upsetting that is.” Things like that.

I know from therapy that when someone repeats something it’s because it’s important to them. They don’t feel heard, or they haven’t felt heard, and now they want you to know the intensity of their frustration. In addition to the brief comments referenced above, when the yeller took a breath, I was able to say, “You definitely sound frustrated. I think I’d be upset too. I think I can understand why you feel like you do.”

3. Offer an alternative time to talk or meet.

It’s not always possible to know what may be happening with the person on the other end of the call. Maybe he was having a really bad day. Perhaps he had an argument with someone important. Maybe he just got his VISA bill. When someone is clearly upset in a way that appears to be out of proportion to the issue at hand, ask if you could arrange to meet at another time or call back later. In this situation, we were able to arrange a meeting at a later time, which helped a great deal.

Regardless of whether or not the other person is using an appropriate tone of voice, volume or intensity, refuse to engage at the same level. Speak quietly; speak respectfully (e.g. lose the sarcasm); and speak slowly. Avoid escalating the conflict by adding your own fuel to the fire.

5. Alert the listener to your behavior.

If you must end the conversation – either because you’re getting nowhere, or you feel like you’re on the verge of being inappropriate yourself, alert the listener to what you are about to do, i.e., don’t just disconnect.

Instead say something like, “Now doesn’t seem like a good time to talk. I’ll call you back.” Or, “You’ve given me a lot to think about. I’ll give this some thought and call you back.” Then hang up.

Do it politely, but do it. When things are calmer, when your blood pressure has gone down, when you’ve had a time to think about what happened and collect your thoughts, then you can resume the conversation. This will take at least 30 minutes and very likely much longer. The important thing is that you return the call when you are able to calm yourself and communicate respectfully.

When Conflict Continues – What Then?

Much of the time, if you’re successful at using the steps above, you’ll be able to resolve the conflict without returning fire for fire. Sometimes, however, when the conflict is longstanding or tensions are high, you may need help. If this is the case, get help. Find a professional who is skilled in helping others communicate well when the stakes are high.

At the end of the day, it’s important to remember that you cannot control anyone other than yourself. You may not be able to keep someone from shouting at you or accusing you unfairly, but you can control how you respond. Someone needs to have some dignity. Let it be you.