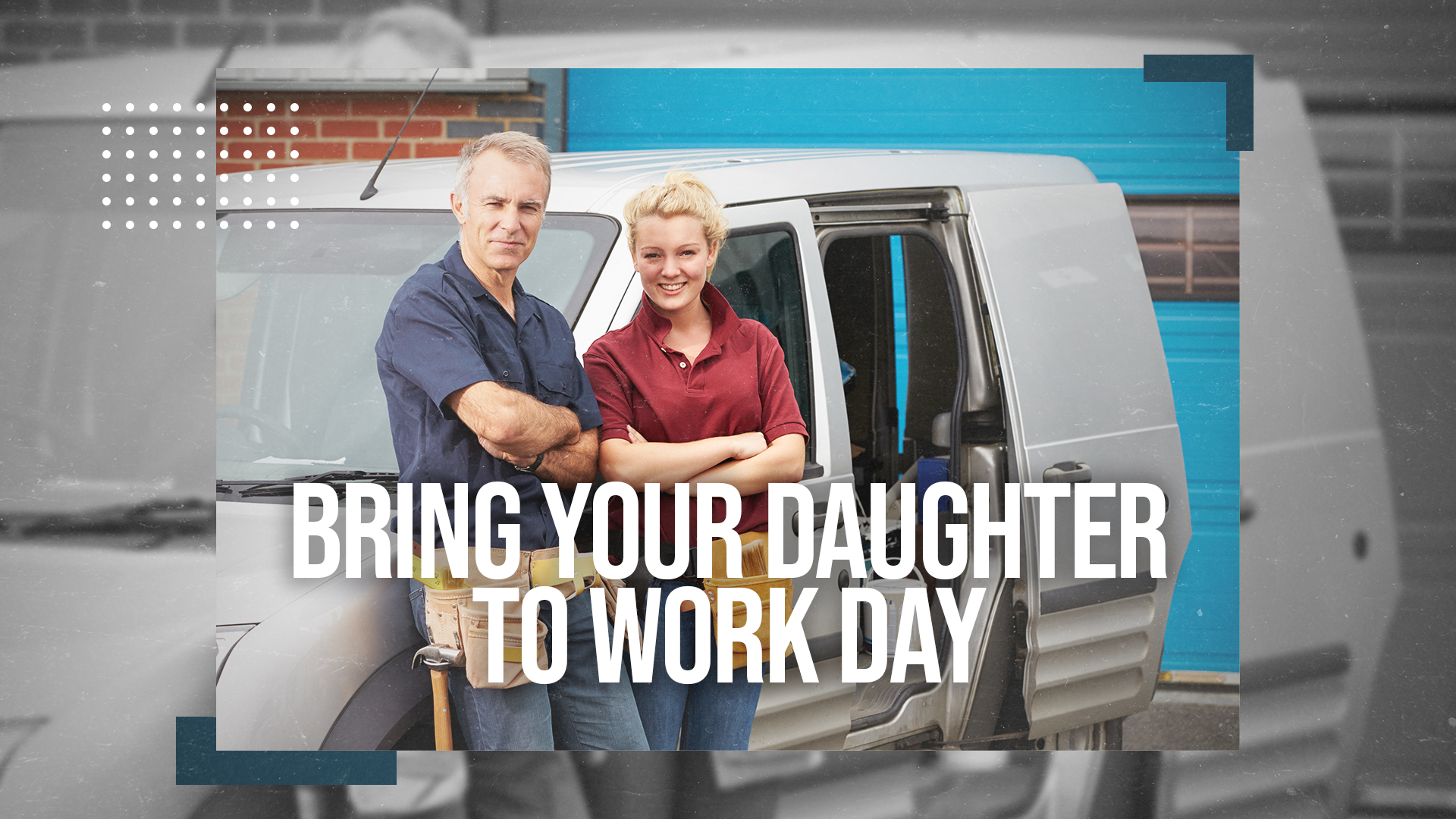 BRING YOUR DAUGHTER TO WORK

When I was younger, I watched TV shows or movies that depicted, “Take-Your-Child-To-Work Day.” I remember thinking how cool it would be to spend a whole day with my parents, learning about their jobs. My mom was a kindergarten teacher, and I spent a lot of time in her classroom, helping with die cuts, lamination, and other odds and ends. But I hadn’t had the opportunity to go to work with my dad.
‍

For the past 33 years my dad has worked in a small, family-owned, land surveying company servicing several rural Oklahoma counties. He doesn’t have large crews to complete field work or individuals specifically drawing plats and paperwork – dad does it all.

Land surveying in rural Oklahoma is hard work at best and brutal at worst. Sometimes he cuts through thick brush, sometimes he wades the Deep Fork River, often dodging the occasional angry snake or beehive. Other times he’s in a completely clear backyard. It is a physically demanding, and at times, dangerous, job.

The reality of this danger became apparent in 2008 when he was in an ATV accident that could have been fatal. Then, in 2011, dad ended up in the heart hospital. After he recovered, the need for an assistant was apparent. I had just turned 16 and, like every other teenager, was desperate for cash. So, I finally had my shot at “Take-Your-Daughter-To-Work Day.” Little did I know, it would last for six summers.

But more important than the fun times are the subliminal lessons and time he shared with me.

I have so many stories I could tell about those six summers. For instance, when someone called the sheriff on us, or when we rode the 4-wheeler through a buffalo herd, or when we met the friendliest donkey named Jack. But more important than the fun times are the subliminal lessons and time he shared with me.

My dad is a man of few words. He’s not a fan of chatty, small talk. At times, he could even be labeled as “shy.” I can still recall the shock I had when I first heard him talking to a client in person. He was confident, kind, and professional. Even in the face of conflict and high intensity situations he remained calm, cool, and collected. He even engaged in small talk. Sometimes these uncharacteristic conversations even lasted long enough for me to take a nap on the tailgate of the truck – and get a nice sunburn on one side of my face.

Working with dad, I gained a whole new respect for him. I never realized all that land surveying entailed – both physically and mentally. The physical toll on his body. The mathematics and engineering skills that are used every single day, and often in his head without a calculator. He inadvertently showed me the value of hard work.  It struck me that though he enjoys his job, he also did it in order to provide for our family. Even on the toughest days, he persisted.

As time went on, dad allowed me to handle more equipment—thousands of dollars-worth of equipment. Equipment that, if broken, would bring work to a halt and cost thousands of dollars to fix. No pressure, right? I was hesitant at the beginning, but he had no reservations. His blind trust in my abilities to take measurements and perform other tasks led to a boost in my own confidence level. I didn’t realize it at the time, but looking back, this is when I began being bolder and having more trust and confidence in myself, my abilities, and my decisions.

He let me into his world in a whole new way. We didn’t talk non-stop; there was a lot of silence. The silence wasn’t awkward, but comfortable. We were simply, together.

My primary love language is “Quality Time.” Working with dad quite literally “spoke my language.” On an average day, we were together in the field anywhere from 2 to 5 hours, with some days reaching 8+ hours. During this time, we talked about life, shared stories, and went on silly tangents. I learned about his childhood, his time in the Navy, and 70s music. In sharing his job and time with me, he shared new dimensions of himself, ones I might never have had the opportunity to see otherwise. He let me into his world in a whole new way. We didn’t talk non-stop; there was a lot of silence. The silence wasn’t awkward, but comfortable. We were simply, together.

I will always cherish my time working with dad. It wasn’t always sunshine and rainbows. We got into disagreements, I shed a few tears, and harsh words were exchanged. But those times pale in comparison.

This summer will be the third without working with dad. I still miss the early mornings, the horrible farmer’s tan, and even the physical labor. But most of all, I miss sharing that time with my dad. Our time together looks different now – less often and mostly over the phone. But sometimes, if I squint and hold my mouth just right, we’re sitting side-by-side on the 4-wheeler in the middle of a field on a hot, Oklahoma, summer day.

McKenzie Schooley is a recent graduate from Missouri State University with a Master’s in Counseling. An Oklahoma native now residing in Springfield, MO, McKenzie has a borderline unhealthy obsession with Chick-fil-a, TikTok, and cold brew coffee.